Like tarot cards, playing cards can be used to perform readings using the same spreads. In fact, historical evidence suggests that playing cards may have been used to perform fortune-telling even before the tarot cards, dating back to the 1400s. In the late 1700s, a cartomancer named Etteilla began using reversed cards in spreads, for which he used a section of a deck of modified playing cards that had notes containing the card meanings printed on them. Madam Lenormand was the most famous cartomancer of the era, and was rumoured to have read the fortune of Napoleon.

To get a reading with a deck of regular playing cards, select from the list of spreads in the form below and click the Go Button. 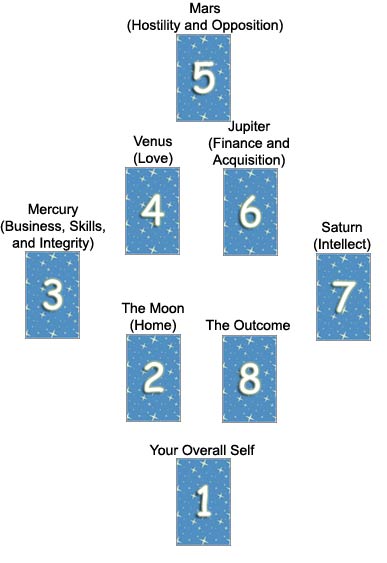 If you are not yet familiar with the spreads on this site, it is recommended to read through the list in order to find one that is best-suited to answer your question. Our playing card spreads are identical to our tarot spreads, along with the rune casts and other online oracles which require certain patterns to be laid out in groups in order to be read in a story-like fashion. There are many spreads on this site which have been designed to answer any types of questions that may arise.