This easy-to-read four-card layout is one of the most useful of all the spreads. The first card is the significator, and the last shows the outcome, provided that the advice given is followed. The advice is broken down into two cards which can easily be compared and contrasted. Card #2 suggests what to avoid, while #3 shows the path to take. </p>
<p>This spread can also be used to ask about the meaning of a card from a previously executed spread that may have been unclear. In this usage, Card #2 shows what it did not mean, while #3 clarifies the meaning. 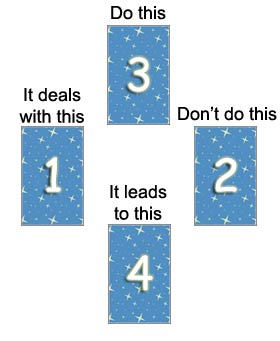 It Deals with This

This represents a dark-haired man of great ambition. He is accustomed to success and usually gets what he wants. He is very active, skilful, and clever, but can also be deceitful. At worst, he may be a tyrant in waiting.

Do NOT Do This

This symbol of prosperity and honour suggests an uphill battle which you are more than capable of winning. The value of this experience can be incalculable in regards to both personal development and opening up new opportunities. However, this card can foretell the possibility of romantic interference.

This is a symbol of ownership, territory, and concern with possessions. The energy of this card represents power and domination, but not necessarily with selfish intentions. Sometimes dominion can be mostly a matter of security, but this card reminds us to be careful concerning this matter.

It Leads to This

This card suggests knowledge of construction, agriculture, or material affairs. There is a slow and steady, unwavering progression – perhaps one who is late to bloom or saving the best for last.